Dangling the Carrot | Story of Mum
Skip to main content

This month we want mums to make our own reward charts - because mums deserve gold stars too!

We’re definitely more into the carrot (or the Octonauts magazine) than the stick in our household. We use reward charts for everything from sleeping through the night to learning how to wipe toddler bottoms. For us, for now, it works.

We’ve got a well refined system of just the right number of stickers until a ‘little treat’, and the grand (ooh can I get that for my big treat, mummy...) incentive of a full page of stickers leading to a ‘big treat’. Our reward charts are a perfectly crafted tool to push a 4 year old with limited ‘future’ perception just as far as we can before frustration sets in.

The basic rules of kiddy reward charts are:

Adapting these rules for mums, I made this true life Mums’ Reward Chart. This is worryingly close to my actual life, and made me snort tea through my nose. I love the idea of a chart that rewards me for things that I manage to 'achieve' on an average day (apart from the hair brushing). 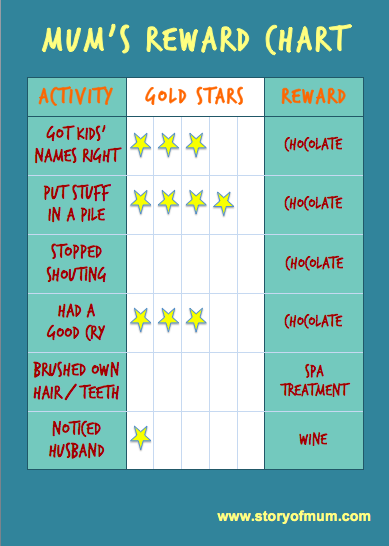 I do deserve gold stars for all of those things above - and if you want to make a chart like that, brilliant! But I decided I'd actually like to try using a reward chart as an incentive to make some positive changes. And so I made my second chart, the one I’m going to print out and stick on my fridge. It’s probably got far too many things on it, I’d never make one this complicated for my children, but it’s what came out of my brain, so we’ll see how it goes…

Now because I spend most of the time when I’m not child-wrangling (and sometimes when I am child-wrangling) on a computer, and because I wanted to impress you all, I made my reward chart on the computer. But most of the charts I make for my son are made in five minutes with paper and pen. 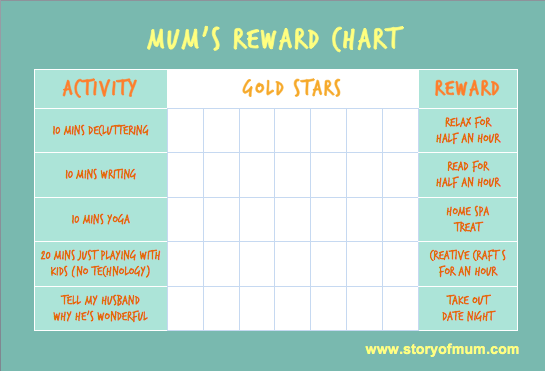 It’s actually quite exposing, making yourself a reward chart. Annoyingly, it reveals what you have so far been failing to do – ‘areas for improvement’ let’s call them. And puts those failings out into a public space – i.e. somewhere in your house, and in our case, right here on story of mum.

Making a reward chart forced me to think about what I want to change and how I can start to do that. It reminded me of the tasks I’d set myself and followed through for a while, but have since let lapse. It of course created yet another opportunity to criticise myself for failing to do stuff. Well STOP RIGHT NOW. That’s not a carrot, that’s a stick. And we are all about the carrot this month.

Later, I’ll explain why I included these particular tasks on my chart. But for now, let’s get you thinking about your own. What small thing could you do that would make life a little bit better?

Remember the rules above, the key to a reward chart is small tasks. Think of things you could do in ten minutes. It doesn’t sound much but ten minutes can make a massive difference (which makes it even more irritating that I’ve stopped doing it… oh my goodness will someone please PLEASE take that stick away. Thankyou).

(I also recommend adding at least one activity to your chart that you already do, but simply don’t value enough. It’s like putting ‘write a to do list’ at the top of your ‘to do list’ – ticking that always makes me feel loads better).

If you do one of the things on your reward chart every day, that’s great. If you do more, greater than great. But take the pressure off, think small, think gradual, think achieveable, think fun. Think about whether you want gold stars or giant furry stickers.

Think of it as excellent role modelling for your kids (even if they’re in their forties now…). When I told my 4 year old that I was making my very own reward chart, he was desperate to see it, fascinated by the idea that I could get treats too. He suggested that my ‘little’ treats should be time on my computer (I direct you to my ‘play with my kids’ task!!) and my ‘big’ treat should be… a lie-in.

I’m going to hold him to that. And if he manages not to wake me up when he hauls daddy out of bed, I’ll give him a sticker.

Join in with Mums' Reward Chart and see other mums' reward charts here.

Yes, this has been impossible
This has been an incredibly hard pandemic for mothers....Yes, it's been hard for so many. Yes, other people have it worse than you. Yes, you're lucky in so many ways...But today we're not going to shrug off how hard it has been for us. We're going to take a moment to appreciate the unsung efforts...
Recent blogs... 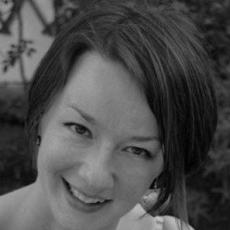 I am a mum of two, who runs a business called Little Knitted Stars creating colourful hand crocheted and machine knitted accessories to wear and for...
read more and connect...